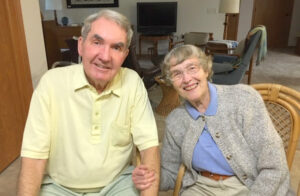 The North Newton Board expressed appreciation for his generosity and leadership throughout the years at their December board meeting when Goering’s retirement was announced. The following reflection from Goering was shared with the board and community via Facebook. Please read his encouraging words!

I am honored by your request for some reflections from me on the NNCF.

The NNCF had its origins in discussions in the office of John Torline, then North Newton City Administrator, during the summer of 2011. It was noted that several surrounding communities–Hesston, Hillsboro, Hutchinson and others, had created community foundations with seemingly positive experiences! John, based on his extensive experience with the Central Kansas Community Foundation (CKCF) emphasized the flexibility of the CF concept to accommodate diverse philanthropic interests of community members. The NNCF was legally established on December 11, 2011 and I became Board Chair shortly thereafter.

The first donation to the NNCF was a very thought and exceedingly generous gift in 2011 of $5,000 from Sher Klaassen Neufeld, then the North Newton City Clerk and now deceased. That donation was the financial base of the Sher Klassen Neufeld Endowment, now with a value in excess of $25,000!

The mission statement of the NNCF emerged from thoughtful deliberation by the first Board of Directors; It stated The NNCF supports efforts that enhance community well being through the expansion of educational opportunities, cultural enrichment and the improvement of human health and the physical environment!

Our first Board was also strongly influenced by the thinking of Andrew Carnegie, creator of the world’s largest foundation which bears his name, who noted that a foundation should have the goal of “…doing real and permanent good in the world” and that it should “…create ladders on which the aspiring can rise”!

My own thinking about my role as Board Chair derived from several sources, including one from the Good Book, viz. Luke 12:48: “To whom much is given, much will be required”! That bit of wisdom describes to a considerable degree my circumstances: I was given an opportunity to get a good education– from grade school through a PhD! I had a profoundly thoughtful father who once remarked to me, “Jim, I hope one of your objectives in life is to leave this world a bit better than when you found it!”

Over time I have been attracted to several quotes of wisdom, from the Good Book and elsewhere, which provided useful guideposts along life’s way! There was a quote from Helen Keller that true happiness in life does not result from the abundance of one’s material possessions; but rather, the extent to which one uses those blessings to assist those less fortunate. The words of Andrew Carnegie continue to resonate strongly, viz. “A foundation should do those things which are of real and permanent good and which create ladders on which the aspiring can rise!” Those are certainly worthy future guidelines for the NNCF!

In closing, permit me to share two more “wisdom phrases” that come out of the experiences Shirley and I have had in teaching English in Southeast Asia during the partial summers of 16 years! The first relates to our teaching in Vientiane, Laos in the summer of 2015. On this occasion I was saying good-bye on the last day of class of Laotian university students. It was a bittersweet occasion for me because I almost certainly would never see these courteous and committed students again! In these circumstances I was seeking some final words of guidance and encouragement, The phrase which came to mind, and which I shared with them, was, “The greatest fear of life should not be fear of failure; but, rather, of succeeding at things that don’t really matter!”

Now I fast forward to the summer of 2017. Shirley and I were teaching English to middle school teachers in Ulaanbaatar, the capital of Mongolia, in the far northeast of Asia. (A report of that summer’s experiences is attached.) During that unforgettable 5-week period of teaching the “aspiring teachers of the grasslands” we were housed in the temporarily vacant apartment of an American missionary on home leave!

Taped on the refrigerator door of the apartment, along with numerous Bible verses, was the quote of great profundity to me and perhaps others: “The purpose of life is not to arrive at one’s grave in a perfectly-preserved body! Rather, it is to slide in sideways, totally exhausted, and shout, “Holy Cow! What a ride!’ What a wonderful philosophy to guide us in our sunset years!

The North Newton Community Foundation will remain in my mind, my prayers and my plans! Thanks again for this privilege of sharing a meaningful segment of my professional career,

With admiration and respect,
Jim Goering

“In our era, the road to holiness necessarily passes through the world of action!” -Dag Hammarskjold, UN Secretary General; Nobel Peace Prize Laureate