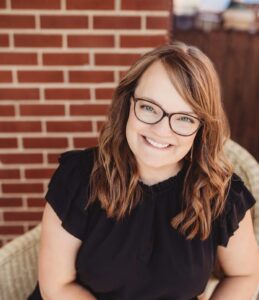 “This is the position that I told myself, if it ever came available, that is the job I really want,” she said. “I want to build relationships with people in these communities. I want to make a difference right where we live and I can’t think of a better way or a better cause than through the community foundation because of the lasting impact.”

She noted that the decisions and programs started now have the potential to impact Halstead and Hesston forever.

It’s felt like a natural transition for her, so far, she said, and she’s been hitting the ground running in her new roles.

“I have quite a bit of foundation experience, so there wasn’t as much of a learning curve there to just jump in and get started,” she said.

In 2009, Bridgeman served as administrative assistant for the Central Kansas Community Foundation—the umbrella organization for the Halstead and Hesston foundations—when it had $6 million in assets. During her time there, under the direction of Sandra Fruit, the foundation grew to $18 million.

Bridgeman spent a few years away from CKCF after moving away from the area, but then upon returning to Newton, she became the marketing director for CKCF for the past six years. She said she’s still offering her marketing services to CKCF on a limited basis, but is focusing primarily on her new responsibilities in Halstead and Hesston.

She’s offered her marketing services to CKCF through her marketing business, Bridgeman Group LLC Creative Communications. She’s been doing this off and on for about nine years, but only made it an official LLC in 2018. She believes this experience will help her communicate past the roadblock of helping people understand what a community foundation is, so they’ll be encouraged to give.

“I have a lot of messaging tactics in my back pocket to educate folks and also bring them into our giving family,” she said. “Not only that, but just being in community foundations gives me a huge advantage when it comes to raising money and making our communities stronger.”

She and her husband Jeremy have lived in either Hesston or Newton for most of their married life. They’ve been in Hesston since March 2020. They have three children, a son who’s almost 12, a daughter who’s almost 10 and a son who just turned 8.

“I love the small-town feel,” she said. “There are so many people that are willing to jump in and make this community a great place to live. For the foundation to be a part of that and to be in this role, we have such an opportunity to really make some of the dreams of these small towns come true.”

She noted she’s familiar with the Halstead community, due to its close proximity to Hesston and Newton, and she looks forward to getting to know it more intimately.

“I’m definitely looking forward to the opportunity to get to know more people, to find opportunities in the community to partner and really make a difference,” Bridgeman said.

Marci Carr, chair of the Halstead Community Foundation board, said she thought Bridgeman could help them with their main goals of growing funds to give back to the community in a larger capacity and telling their story, so patrons understand what the foundation does within the community and will be more apt to donate.

“Ashley’s skillset and eagerness to serve a non-profit will assist us in achieving these goals,” Carr said. “We unanimously voted to make her part of our team and are excited and eager to begin working with Ashley.”

Rick Toews, chair of the Hesston Community Foundation board, noted that Bridgeman is a good fit for the director position in Hesston because of her familiarity with CKCF and marketing.

“Ashley is also very personable, relates well to everyone and makes people feel comfortable,” he said. “Since Ashley lives in Hesston, she is familiar with the community. I have worked with Ashley before on other projects and really appreciate her vision and knowledge.”

Carr and Toews explained that the joint position had come about since both foundations had found themselves in need of a new director at the same time.

“Since each position is part-time, there was discussion of combining the roles in order to attract applicants that found additional hours more appealing,” Carr said.

“I would think that having one director for both communities would have a cost-savings for both foundations because there is one phone, one computer, one printer, etc.,” Toews added.

Both foundations made the decision to hire Bridgeman, individually.

“This is an unprecedented position,” Bridgeman said. “This is the first time there’s ever been a regional director and so I’m curious to see how it works out. But so far, it hasn’t been a challenge.”

The position is 20 hours a week, but not necessarily split evenly between towns. She noted she’d balance her time between towns based on which foundation has more going on at a given time. She also believes she’ll be able to replicate some of her efforts between the two foundations.

“Halstead and Hesston are very, very similar and I think what would work in one has a high possibility of success of working in the other,” she said. “So, that’ll be neat to see how we can co-op some of these efforts between the two communities.”

Several ideas are in the works already for the foundations. Halstead is planning a charcuterie box fundraiser on May 5, with more information coming soon. Also, in her conversations with outgoing Hesston director Shana Smith, she said some ideas have been discussed that excite her.

Bridgeman added she looks forward to getting to know everyone in Hesston and Halstead and working for them through the community foundations.

Article posted with permission from the author.