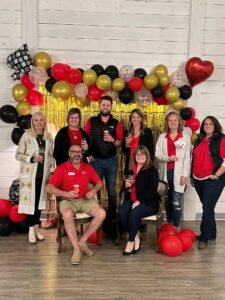 Friday night, November 11, Hesston Community Foundation hosted their first Casino Party fundraiser! There were approximately 100 people in attendance at the event. Wichita Casino Parties flawlessly executed the evening’s entertainment. The dealers were knowledgeable about the games and encouraged enthusiasm among the players. Because the games were simply for entertainment and education, everyone was a winner!

Chip counts were totaled at the end of the night and players entered to win the prize raffles, which included Apple AirPods and a 55’’ television. Heavy hors d’oeuvres were catered by Water’s Edge Restaurant and Catering and the evening featured a silent auction. Local sponsors responded generously to our call for support.

The highlight of the evening was gathering with our foundation family and new friends to support the organization. Former directors and board members as well as fund advisors and our donors were in attendance to enjoy the evening. The program called attention to their contribution to the foundation and highlighted recent successes. Russ Buller with Hesston Fire/EMS gave a short speech regarding the foundation’s purchase of their saws in the most recent grant cycle. Overall, the evening was very well received, and it looks like we might just have to put a date on the calendar for next year!