In 1886 the citizens of Newton made a commitment which continues to benefit people in the community. It was in that year, by special election, they voted to establish and support a public library.

An annual allocation of $1,500 from the City of Newton, a gift of land from E.C. Llewellyn, and a $15,000 gift from Andrew Carnegie made the building of the Library possible at the corner of 2nd and Main Streets. On March 14, 1904, the Newton Free Library building was dedicated with an open house.

In 1973, the Newton Free Library legally became the Newton Public Library in a new home at the corner of 7th and Oak. The dedication and open house on April 1, 1973, started the new era of service built on the fine traditions of the past.

Through the years many dedicated individuals have made the Newton Public Library an important information and recreational facility for the community. The past was shaped by hard-working, generous and enthusiastic supporters.

MISSION
The mission of the Second Century Library Foundation – Newton is to enhance the adult collection of the Newton Public Library by increasing and promoting educational, literary and artistic resources available to our community.

VISION
Just like the citizens before us, we have a vision and a plan for our Library and community.The Second Century Library Endowment Fund of the Newton Public Library has a current goal of $500,000. The funds will provide for an annual income for enhancements beyond those possible through general operating funds.

Advisory Board of Directors

For more information, to make a gift, or to learn more about establishing your own fund contact: Marianne Eichelberger, 316-283-2890 or visit their website. 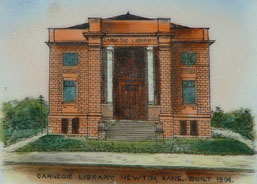 In 1986, for the Centennial Anniversary, Alden Allbaugh wrote a comprehensive history of the Library entitled The Newton Public Library 100 Year History 1886 – 1986. The Second Century Endowment Foundation was incorporated to provide funds for enhancement of Adult Services. 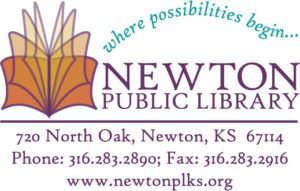 where possibilities begin
Established September 27, 1886
Make your commitment to the future – today!